Sometimes I write things. Lots of things. And don’t get them posted anywhere right away. I have a little WordPress site that’s password protected where I’ve been dumping inventory, original and fanfic both but not poetry because apparently, I’ll never get the hang of crossposting that. It’s behind. Not sure if I want to go ahead and unlock it or not because it’s anything but complete and it reveals every sock I ever had.

I’ve got a little wiki where I log stuff as I write. The poems go on one page with the actual title and body of the poem and no stats or data beyond date written and their chronological order (aka, this is where I post them for my own self but without metadata except as implied), and the fiction of all kinds gets logged in stats and linked form but no content, which is making it a lot easier to figure out where all my stuff is and isn’t without getting bogged down in crossposting. I have a lot of stuff and going back more than ten years of didn’t log it right.

I have a list of people I’ve carried four, five weeks now that I want to actually sit down and write and connect with because I’ve been heads down, keep head above water, crash at the first sign of duties done lately. This extends as far as I’ve seen friends’ posts and prayed for them but didn’t comment. Oops. I love you all really. This too shall pass.

That said, lots of work work today on the day job. And also, huge shoutout to Erin Condren and their life planners, more importantly the stickers. I’ve been trying to use lists, planners, and every organizational thing under the sun to keep taking all my stuff even when I’m so sick I forget and to DO all my stuff even when I start forgetting. It’s never worked. Until the stickers. 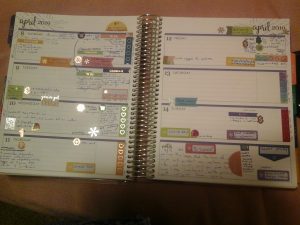